Skip to content
Cart
Monthly Payments As Low As 0% APR

Monthly Payments As Low As 0% APR

We offer multiple payment options including financing with Affirm, Paypal Credit, lease to own with Katapult, and monthly payments through Splitit.

“With our first Impact crate I’ve had it for years, I still have it to this day. I actually had that crate in my car 2 years ago when I got in an accident that totaled my vehicle, but the crate was perfectly fine and so was the dog that was inside it.”

Insuring Your Investment For Life

“I go to a lot of dog shows and I am a professional groomer so I needed something that I knew I was putting an investment into that would last me a long time.”

The instruction printout was easy to read but the picture threw me off. The wheel cart was very simple to install once I figured out which side the wheels went on. YouTube helped too. I’m so glad I made this purchase because it helps move the crate around the room especially when I’m vacuuming up all the dog hair.

Thank you for your feedback, Michele!

Crate and pad are perfect of my 45 pound Belgian Malinois.

We made the investment in 2 identical crates for our two guys primarily for the RV while we are on the road. When we received them and unpacked them we set them in the house hallway stacked on top of each other temporarily. Well our German Shepherd FiFi immediately picked hers and jumped into the top one where she hangs out now when we leave the doors open. Fat Freddy was a little more timid, I think because of how dark it originally was for him, but has now gotten used to it and all is well. These are going to be great on the road (relax people, not while driving). Great, well built product.

We appreciate your thorough review, Darren. We're glad to hear that FiFi and Fat Freddy are enjoying their new crates!

Mr. Dog has always hated crate time. He’s a big, 75lb Malamute and and blasted through more doors, fences, crates and windows than I can count. He had a habit of going to the bathroom in the crate, ripping up wire crates and spending the entirety of his time in there crying and throwing tantrums. When he is with people, he is the most mellow dog ever, but when he is alone, he is entirely different. I had finally sought out a “mega crate” after Mr. Dog cut up his nose on the most recent wire crate. Not only was it physically hurting him, but it was hurting me too. It is hard to love a dog that gives you anxiety every time you leave him alone, who gives you a new disaster every time you come home.
Then we got the Impact Crate, and I must say, it works exactly as advertised, and then some. Not one escape act, not one bathroom accident, not even tantrums of note. At first, Mr. Dog did his normal thing, tried clawing and biting the door and so on. But he very quickly realized there was no chance of escape. Now, I come home to a sleeping dog! He not only relaxes, he sleeps in my absence. I cannot recommend this product highly enough for those with destructive and high anxiety dogs. The price tag is hefty, but pales in comparison with the replaced windows, doors, fences, wire crates, couch cushions, etc. And more than that, it gave my dog and me peace.

Thank you for your thorough review, Tim! Peace of mind goes a long way. We're so glad to hear that Mr. Dog can finally relax in a crate.

Boomer is a 50 lb Yellow Lab /Houdini mix. He will try to escape anything! He bends the wires of ordinary kennels and will shred, dig, or bite his way out if possible. So far Impact’s crate has held him. It was very easy and lightweight to set up.
Would definitely recommend it!

Thank you for your 5 star review, Jessica! We're glad to hear that Boomer is safe in his crate.

It's my third one and I love it just wish I would have went up.a size

Our dog is a female Australian Shepherd and we bought a 34 in crate. She weighs about 40-50 pounds.

Thank you for sharing, Liz!

B
Collapsible Dog Crate B.
Quality and Convenient!

I love how convenient the collapsible crate is. The size is great for my large German Shepherd. My favorite part is the door handle. It’s very secure and easy to open and close. Highly recommend! 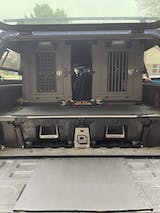 Thank you for sharing your vehicle setup, it looks great! We're happy to hear that you like the slam latches!

This is the second collapsible crate and we love it! Got the second one for traveling and the first one has kept our crazy Mal in her crate safely.

We're so glad to hear that you're loving your crates, Jorge! Thank you for your continued business.

Our dog escaped from every other crate we tried. The High Anxiety crate not only kept her from escaping (she tried, though), she loves to sleep in it at night with the door open. It made me wonder whether she escaped in the past because she did not feel safe. Now, perhaps, she feels safe because she knows that if she can't get out, nothing can get in.

Happy. Relieved. So is our high-anxiety Houdini dog.

We're so glad that your dog enjoys her new crate! Thank you for your review, Rick.

I bought the 48" inch crate for my GSD mix. She's a bit over 33" inches high, but I do feel like we could have gone down one size. In any case, I think she likes the crate! She's a houdini that could escape other crates and was super destructive in the house while I was gone even for as little as 30 minutes. Now, she seems to relax in the crate and she doesn't even bark or cry when I'm unlocking the door. I wish I would have bought this a leather couch, leather chair, dozens of throw pillows and several pairs of shoes ago. It's expensive, but I feel like I have my life back...and that she's content and secure when I'm gone. I would highly recommend this to other people struggling with a dog with separation anxiety.

Wow it sounds like you and your pup have been through a lot with her separation anxiety! We're glad to hear that she feels comfortable in the new crate and that you can finally have peace of mind. Thank you for your review!

Super happy with my stacks with grooming table and arm. With Covid restrictions at shows, it makes for a super convenient in and out show and go solution. I ordered vinyl letters from Sticker Mule and stuck my website on the side. Happy with the quality and price ! I show Miniature and Toy poodles and got the small size two stack with dolly grooming top and arm . 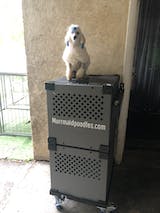 Thank you for your wonderful review and photo, Joy! We're excited for you to use your grooming and wheel cart setup at upcoming shows.

We bought the 40” extra long high anxiety crate for our 85lb German Shepherd who has fear aggression towards people and our other dogs. She has destroyed every kennel we bought but this one is different!!! It is built so well and I love the 5 locks, i will never have to worry about her getting out!! Thank you

Thank you for the great feedback, Tina! We're so glad your german shepherd is secure in her new crate.

My 8 year old Bearded Collie had decided she no longer wanted to be left in her crate. (I only crate her when traveling.) She escaped from a high grade wire crate and I knew I could no let her have that opportunity again. The Impact Stationary crate was the obvious and perfect answer. The first time I left her, she tried her best to repeat her escape, as evidenced by bite marks around the latch on the inside. The Impact Stationary crate preformed perfectly! So happy with my purchase! Thank you Impact Crates for peace of mind. 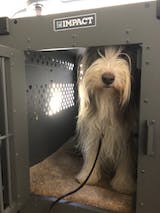 Thank you for sharing your story, Valorie! We're glad to hear that you finally have some peace of mind and that your collie has a secure crate.

Liked them so much I bought two of them (ok, in all honesty I had to since I have two labs)! Bombproof construction and waaaay lighter than they appear.

We appreciate your 5 star review!

My crate arrived on a small pallet via LTL shipping company and was damaged. Customer Service was very responsive and provided a number of options to resolve the issue. I chose to buy the damaged crate at a significant discount and have a replacement shipped to me. The damage was significant but I was able to use a rubber mallet to get it mostly back into shape. The finish is durable, even with my hammer beating on it. I’ll have no problems putting this thing back in my SUV. The replacement crate was an “upgrade” and had a side door as well as padding on the top. I haven’t reached out yet so I’m not sure if this was an accident or not. While it’s nice, it will limit my ability to secure these in my vehicle side by side due to the lock flange that sticks out of the side door. The side door also rattles as there are a few rubber stops missing on the door frame. My first kennel doesn’t make a peep. Easily rectified. The pad that I got with the kennels is a tight fit, very durable for a working dog and washes off easily. Overall happy with my purchase and the way they made things right after shipping damage out of their control. Would recommend. 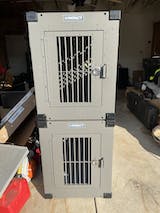 Thank you for your thorough review, we appreciate your feedback! We're happy to hear that our support team was able to help with the unfortunate shipping damage issue. Enjoy your new crates!

Just switched out all of our kennels for our Impact.

We are really happy with the choice so far!

Thank you for your feedback, Natasha! We're looking forward to your detailed review in the future.

Very well made. Seriously stout. I’ve got an American Bully, who was abused/neglected, who’s incredibly strong. He’s torn up wire crates, injuring himself in the process. There’s no way he can damage his high anxiety crate nor himself. These crates are quite expensive but will last for generations.

We're happy to hear that your pup finally has a solid crate to keep him safe! Thank you for your review, Reed.

A crate my GSD can’t get out of. I got a 48’ stationary, royal blue and I love the color. Looks really nice and the perfect size for him. The mats are really easy to wipe down with a wet towel.

Thank you for your thorough review, Amy!

Incredibly sturdy! My husky finally has a crate she can’t escape from or destroy. Also the surface is easily decorated by stickers.

Thank you for your 5 star review, Rachel! We're so glad you like it!

Highest quality crate I’ve seen. Worth the money for the peace of mind that by Belgian Malinios will not her herself trying to escape.

Peace of mind goes a long way! Thank you for your 5 star review, Michael.

Always wanted to get one but never was a necessity until my dog OUTGREW every other cage and kennel. Bought this and haven’t been happier. Pricy but well worth the investment. He is going on 2 so this will last a long long time. 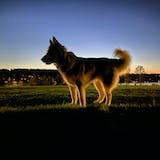 Keone, we're happy to hear that you're happy with your new crate! Beautiful pup too!